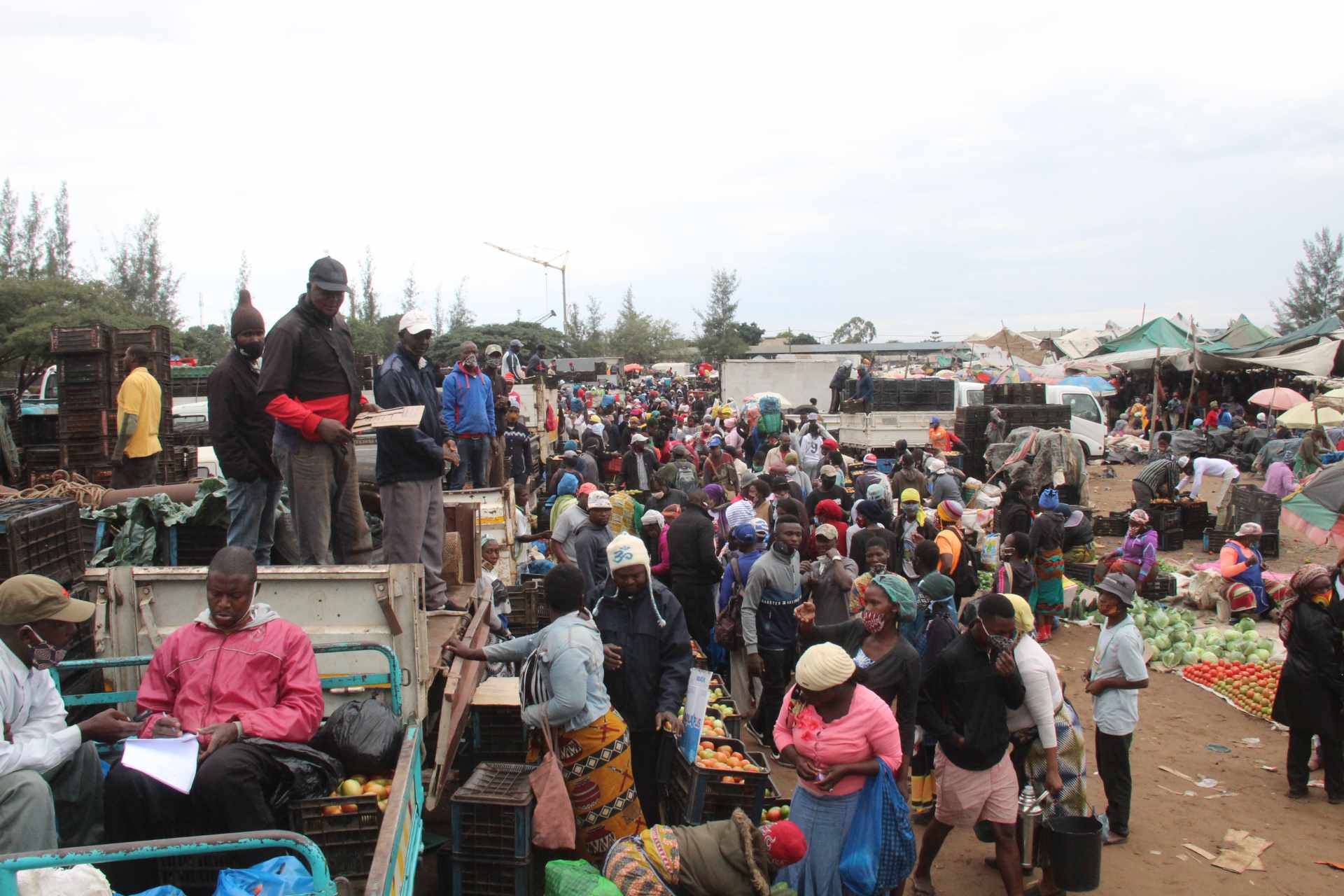 The Province of Nampula is situated in the northern part of Mozambique. With an area of 79.010 km² and a population of 5,758,920, Nampula is the most populous and one of the most densely populated provinces of the country (50.44/km²). The region suffers from regular floods. The last cyclone, Kenneth, destroyed an area of nearly 32,000 ha and affected 43.273 families.

The poverty rate is extremely high, with 65%, a million people need food aid [1]. Malnutrition is prevalent; children and women are significantly affected by poor diets. Nampula has (apart from Zambezia) the worst education and health indicators. The province's economic performance is weak: Nampula participates with only 14% on the national PIB but represents 21% of the national population.

The region is a major producer of cotton, cashew nuts, and tobacco and exports food items to other provinces. Most of the agricultural production is in the hand of small farmers, apart from some extended farms for cash crops. The infrastructure is poor; the main roads do not connect with the main economic centers and markets. [2] 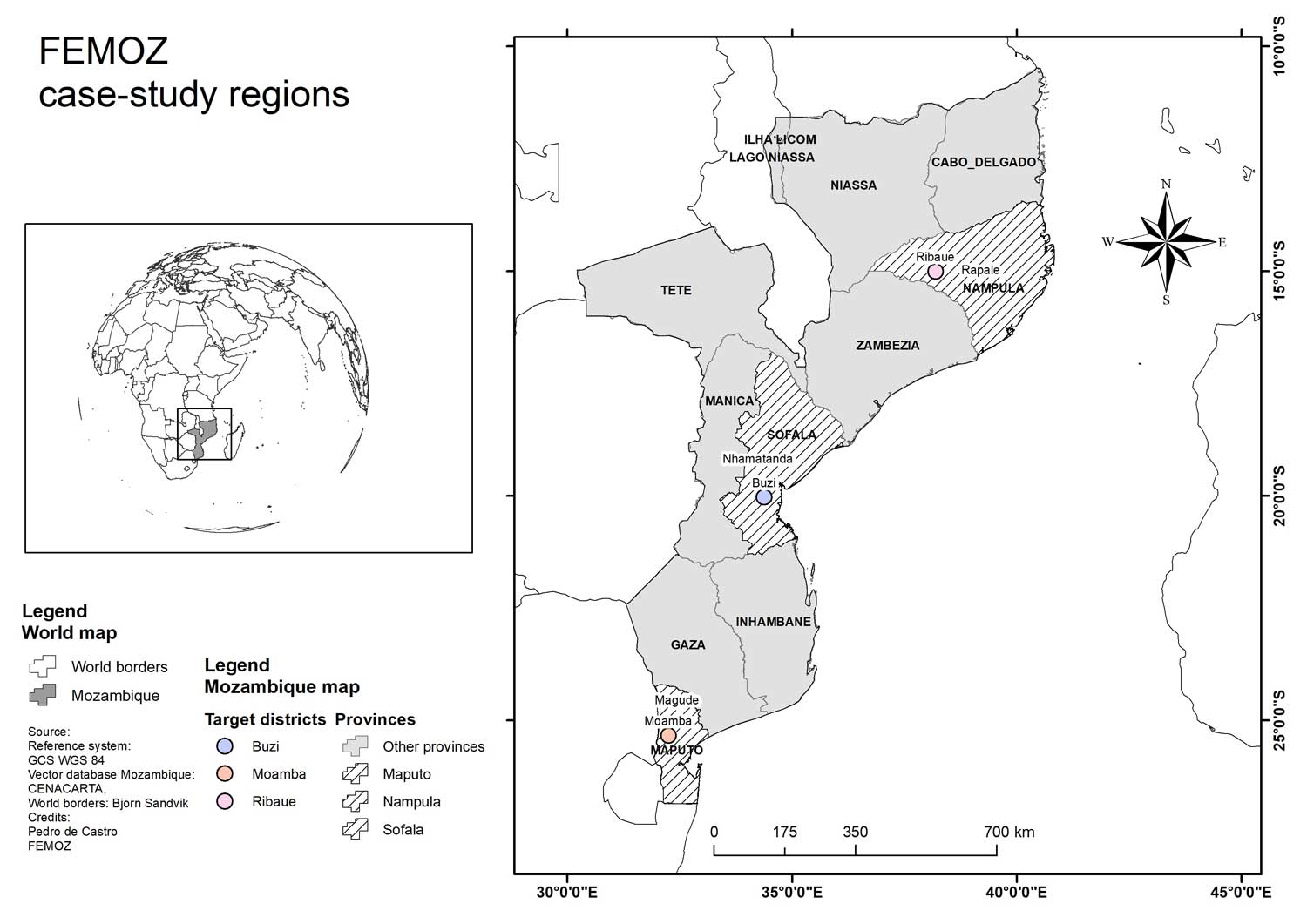 The district Ribaué is localized in the western part of Nampula, with a total area of 6,292 km² and a population of 228,411 [3]. 92% of the population practice subsistence agriculture in small family entities, cultivating mainly maize, manioc, sorghum, beans, cotton, tobacco, and horticulture. The production in drylands and missing irrigation techniques makes agriculture extremely dependent on weather conditions. The risk of losses is high, pests, small storage, and processing capacities worsen the situation, and climate irregularities such as late or too plentiful rain and winds linked to floods strongly affect the population's nutrition status.

The road network is very poor (only 30 km of classified streets) and consists mainly of dirt roads, many of which are not passable during the rainy season.

The health situation of the district is problematic, with malaria, diarrhea, and HIV/Aids, and the indices of chronic malnutrition are accentuated. This district showed an aggravation of Poverty Indices from 54% in 1997 to 58% in 2007.

Ribaué is extremely affected by chronic malnutrition but at the same time belongs to the most productive agricultural districts in Nampula.

Sofala occupies an area of 68,018 km² and has a population of 2,203,760 (32 persons/km²). In colonial times the province was important for cash crop production and occupied a central role in the transportation system, as the Beira corridor and the Sena railway linked the landlocked neighboring countries Malawi and Zimbabwe with the harbor of Beira. Sofala was severely affected by the 16 years of civil war. Its railway and road infrastructure were completely destroyed, and the majority of the population migrated to the cities. The crisis in Zimbabwe contributed to the further deterioration of the economy.

Sofala has huge agricultural potential with its different agro-ecological zones: The production of cassava, maize, rice, groundnuts, sweet potatoes, pineapple is important. Few agro-processing exists for sugar cane, maize processing, and soybeans. The railway system and part of the roads have been rehabilitated, but infrastructure and production have been negatively affected by the current floods and cyclones, even if not always with impacts comparable to the devastations brought by Idaii and Kenneth in 2019. Parts of the population were resettled to avoid the risk of floods and inundation. Many small-scale farmers, however, returned to the affected zones, as residual moisture in riverine and low-lying areas allow planting for a second season as part of the livelihood system.

Sofala has good conditions for fruit production as the harvest season for most of the fruits is eight weeks earlier than in South Africa, providing possible windows of opportunity.

Buzi is one of the coastal districts in the southeast of Sofala province. Buzi has an area of 7,329 square kilometers and a population of 177,348 [4]. Due to the Buzi River and numerous lagoons and brooks the district is extremely vulnerable to floods.

In colonial times Buzi District was strongly shaped by the "Companhia Buzi," which cultivated an area of 312,500 ha for agro-industrial production of cotton and rice. A substantial proportion of the population worked in the city of Beira. Due to the civil war and the closing of most of the factories under the socialist government at the beginning of the 1980s, the economy of Buzi underwent significant changes. Small scale agriculture is the main economic activity in the district [5], with some use of animal traction and, in rare cases, tractors. The district has a good potential for the cultivation of cotton, copra, and cashew and the breeding of cattle, chickens, ducks, sheep, and goats, among others. The development of agricultural activities is, however, affected by the poor irrigation capacity and the irregular rainfall, the exposition to natural disasters, pests and diseases and lack of seeds. Complementary to agriculture, fishing is included in productive activities.

Buzi is regularly affected by floods and inundations due to heavy rains and water discharge from dams in Mozambique (Cabora Bassa) or neighboring countries (for example, Kariba in Zambia). The National Disaster Risk Management Institute INGC is very active in Buzi and has established a huge network of communal-based disaster risk committees. The districts experienced extreme losses of cultivated land and infrastructure in 2019 (by the cyclones Idaii and Kenneth). Humanitarian aid avoided the worst effects. However, malnutrition rates couldn't be contained. In an estimation from the Integrated Food Security Phase Classification (IPC), acute malnutrition in Buzi from 2019 until February 2020 was severe, particularly for children between 6 and 59 months, where this condition reached up to 29,085 individuals [22].

The long-lasting civil war and its local impacts and the exposition to natural disasters have created a basic feeling of insecurity and vulnerability in the district [5].

Although health and nutrition characteristics are better than in other areas, people are still vulnerable in the province. The regional health network comprises 92 health facilities [9]. Of these, three are rural district hospitals, 23–50 health posts located at small rural administrative areas within the province, which offer very basic health services to their community, and a set of health centers [9]. Although chronic malnutrition is a national challenge, it is less pronounced in the province of Maputo than in the northern provinces[10].

The Maputo province (as part of the southern region) is mostly dry, with small pockets of semi-arid areas along the eastern border and a wetter coastal strip [11]. The production is strongly focused on groundnuts, cotton, cassava, sugar cane, and chicken [4]. In the 2018/19-Agrarian Campaign, irregular rains, intense heat, and drought in the southern region caused a reduction in crop productivity and loss of areas, with about 34.5% of the sown areas considered lost [12].

The Moamba district is located in the northern part of Maputo Province, 75 km from the country's capital. The area of the district is 4,589 km2, and its population is estimated from the Census in 2017 at 88,583 inhabitants [4].

The district has two seasons, a hot one with higher temperatures and heavy rainfall that runs from October to March and a fresh one that extends from April to September.

The arable land potential of the Moamba district is estimated at 229,000 ha (about half of the total area), with less than 20% of this area being occupied by agriculture and about 60,000 ha of pasture (23% of arable land). In general, agriculture is practiced on family farms of 1.5 ha, under a combination of cultures based on local varieties. They grow vegetables, cereals, and tubers. Fishing is fundamentally artisanal, with the predominance of the use of the hook, developed in the Corumana Albufeira, allowing the daily flow of fresh and dry fish to the markets of the capital and the surrounding districts. Together with fish are cattle, goats, and pigs form parts of families' diet [13]. The district lies in a zone which with chronically deficient food availability. Even though Moamba is the second-largest producer of bovine in the province, the consumption of animal fat is low, and the poverty rate is estimated at 60% [14].

Institute for Technology and Resources Management in the Tropics and Subtropics